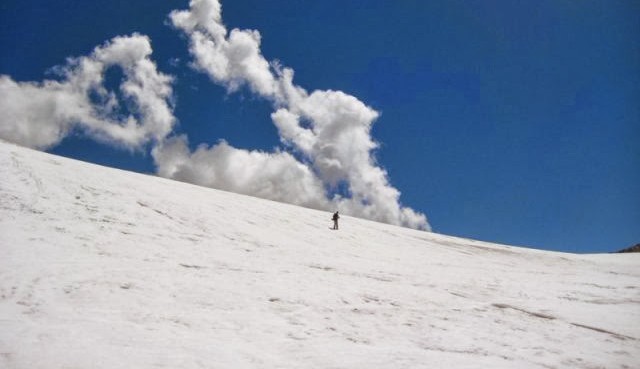 Early this year, I had the opportunity to be in Oxford, England with one of my daughters. We are both bibliophiles, and so, naturally (and precariously!) we spent some time in Blackwell’s. The bookshop lays claim to the largest book-sale room in Europe (the cavernous Norrington Room is 10,000 sq. ft.), and was named by the Guinness Books of Records for having the largest single display of books for sale in the world. Waiting in line to check out, my attention was captured by a book entitled Silence, discreet stacks of which were sitting on the counter.

The staff person said these were going like proverbial hotcakes, and complimented me on my “impulse buy” when I added one to my other books at the register. It was and it wasn’t: yes, I’d just found it there at the counter, but, on the other hand, I love silence and silence has been a poignant element in my own faith story. In our screen-dominated, ever-connected world, silence is precious, rare.

The book was written by a Norwegian explorer who is the first person to have walked to the “three poles”: North, South, and the peak of Mount Everest. He walked 55 days alone across Antarctica with a broken radio—“broken” because the company who flew him to the starting point insisted he take it, but he sneakily left the batteries on the plane.

He quoted a study that suggests something terrifying about our modern world and silence: “Humans today lose their concentration after eight seconds. In the year 2000 it was twelve seconds, while goldfish average nine [seconds].” And “We live in the the age of noise. Silence is almost extinct.”

Of course, even roughly 350 years ago we humans had issues along these lines. Blaise Pascal argued in his Pensées that “All of humanity’s problems stem from man’s inability to sit quietly in a room alone.”

Certainly, silence can, of course, be associated with painful experiences, of being excluded or lonely.

But, to me, intentional, chosen silence is completely different: it begins from the inside, and it is—in and of itself—an implicit recognition of God. Often it leads beyond the implicit, to prayer, and indeed to powerful prayer, even if that prayer remains deep within, hidden from any outside view.

For these reasons I find intentional silence is always renewing: life is vibrant again; there is a reset, a return of vision, a renewal of gratitude. Somehow a fountain of joy is released. Very much like the cool, clean, bubbling refreshment of wading in a mountain stream in the heat of summer. Honesty is possible, again, at a deep, deep level, beyond the façades we routinely allow ourselves. And always God is there, in the honest moment, as if he’s been waiting for this, just patiently waiting.

It is not easy to achieve silence, but it is worth it, whatever we have to do. Even in the car, even for short periods, even if while doing manual tasks, the silence is worthwhile and can be vibrant. As the intrepid Norwegian explorer notes, “Shutting out the world is not about turning your back on your surroundings, but rather the opposite: it is seeing the world a bit more clearly [and] staying a course…”

He also told how when he and a fellow explorer were camped at the North Pole, to which they had walked over forty-eight days, an American spy plane flew overhead, turned, circled back, and dropped a box of food to them—the pilots’ lunches. The explorers were famished, and tore into the packages for the sandwiches, juice, and kippered herring, lying it all out on their sleeping bags. He was ready to devour it, but his comrade suggested they should sit in silence and slowly count to ten in their own minds, as a way of showing appreciation and restraint. In order to “remind each other that satisfaction is also a matter of sacrifice. Waiting felt strange. But I have never felt as rich as I did in that moment of silence.”

This Lent, may we let silence lead us to the richness of our Lord Jesus’ presence with us. May He be praised!