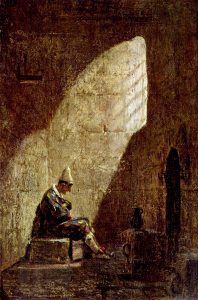 To talk about Lent, I need to talk about seminary. My undergraduate was about skipping home to talk to Rebecca about some idea I had learned today, and how it’d changed how I thought about the world. But at seminary, my intellectual overhauls would happen behind the scenes, at church or in my personal reading or smoking pipes with friends. And as they happened, seminary became more and more an alien land. (As an aside, it’s hard to explain how much those friends kept me afloat. I’d sometimes leave class thinking, “Today, I sat in the back of the class, silent through discussion on a subject I care deeply about, because I didn’t know how to contribute without calling the whole discussion radically into question.” I’d go find friends and tell them I felt crazy and alone. They’d tell me that, if I was crazy, they were crazy too. And at least that meant we weren’t alone.)

All the same, seminary was right for me. But I don’t mean just that I discovered Anglicanism (which, for me, is shorthand for patristic, sacramental Christianity, with its beauty, history, and physicality), or that Joseph was born (joy of my life that he is), or that I discovered contemplative prayer (a hundred blessings on Bob Craig, my spiritual director). For me, seminary was about me, in the best way. It wasn’t about class as much as quiet. As I would tell it to Fr. Tim later, it was almost as if, from that first moment I walked onto campus, God turned down the volume on everything outside. Parents, friends, family, everything. Very little crisis. Very little emergency. It’s almost like He had scooted me into a separate room and closed the door. And that gave me time and energy and space to wrestle my demons. (Maybe that’s always been what seminary is for, but that’s a reflection for another time.)

And so I did it. I wrestled my demons with zeal. In hindsight, I’ve sometimes been ashamed that I hadn’t kept up that pace, but I’m thinking now that no one really can. There’s a place in Christianity for celebration (white) and for rest (green) as much as there is for taking a shovel to where you’re sensitive or hurt or angry and digging up what’s down there.

For me, seminary was Lent.

Lent is a season where the Church, in her wisdom, says to us, “Okay, team. Lots of the year we let things go. We keep the peace. We don’t have the time. We have other things going on. Good, great things. And lots of the time that’s probably okay. But sometimes you need to make the time. So we’re giving you a whole season to make the time. Take a magnifying glass to your soul, identify a problem, and pick a fight.”

It’s war-time. Go pick a fight. It’s probably going to hurt. Lent can be a raw time. But it’s good for you.

You guys can do this. I believe in you.