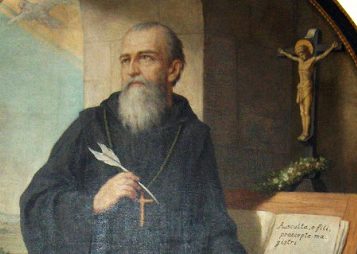 Saint Benedict was a college dropout.

He was born about 480 AD to a Roman family of means, but, in his 20s, would abandon his literary studies and the security of noble life. In his travels, Benedict happened upon a monk named Romanus. He left their conversation with the gift of Romanus’s habit (a robe worn by monks) and a zeal for the monastic life. Benedict would then live for three years, alone, in a cave.

During this very simple, very quiet time, Benedict wrestled his demons. In silence, he matured. He grew in knowledge of the soul. Then, he left the cave. Over the course of his life, he would lead different monastic communities (the first went particularly badly; the monks hated him and tried to poison him). But eventually he’d move to Monte Cassino, in southern Italy, where he would institute the most famous document in all monasticism, “The Rule of St. Benedict.”

Broadly, the Rule is about spirituality (how to live Christianly) and administration (how to run a monastery), but its great contribution to Christianity is the connection it sees between these two emphases. Benedict finds it very important to order life on purpose–to create a kind of everyday liturgy, a rhythm for living ordinary life. This structure, like the painted lines of a football field, provides a space and an order for things to work rightly.

Devote a significant portion of time (say, 20 or 30 minutes) to a simple, manual task. Sweep the floor. Clean the apartment. Cook dinner. But, turn off the TV. Don’t listen to music. As you do work, pull your mind ever back to the task. In the quiet, simple structure of this time, observe your interior life. “Listen and attend with the ear of your heart.” When you’re done, journal about what you observe.

Our reflection about St Irenaeus was about theology. Since heresy exists, how do we think Christianly? But our reflection about St Benedict is about liturgy. How do we order our lives in an intentionally Christian way? Take a liturgical audit. Write down your weekly schedule. Is there an intentional order that governs your life week-by-week? Day-by-day? Does it reflect Christian values on formation and service? Or distraction, escape, and the tyranny of the “urgent”? Consider what it might look like to consecrate time to the Lord, every day (prayer time, perhaps Morning and Evening Prayer) and every week (Sabbath).

Alisdair MacIntyre famously finished his book After Virtue (1981), “This time, however, the barbarians are not waiting beyond the frontiers; they have already been governing us for quite some time. And it is our lack of consciousness of this that constitutes part of our predicament. We are waiting not for a Godot, but for another—doubtless, very different—St Benedict.” Recently there has been much talk of a “Benedict Option” for Christians in the contemporary world. What aspects of St Benedict’s project are helpful for contemporary Christians and their families, living in an increasingly post-Christian West? How might we live as an intentionally alternative community without, say, moving into a commune in the woods?