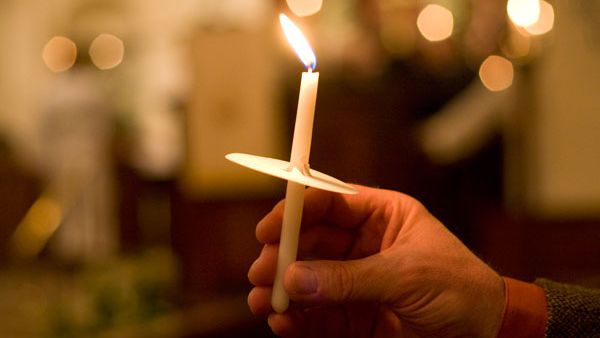 We come back again this week to the greatest festival of the Christian year, the Great Triduum (“three days”), beginning on the evening of Maundy Thursday and ending at sundown on Easter Sunday. (Here’s a quick summary: Maundy Thursday commemorates the institution of the Eucharist at the Last Supper and Christ’s washing of the disciples’ feet. On Good Friday we remember the events leading up to and including the Crucifixion. On Holy Saturday we remember the time that Christ spent in the grave. At the Easter Vigil, we commemorate all of salvation history leading up to the resurrection. On Easter Sunday, we remember and celebrate the triumphal resurrection of Jesus Christ from the dead! Easter Sunday then kicks off a period of 50 days traditionally known as Eastertide, ending with Pentecost Sunday.)

This year we will be saying, doing, singing, hearing and seeing almost the exact same things that we said, did, sang, heard and saw last year, and the year before that, and the year before… etc.  Why does it not get old? Why do so many people keep coming back for more?

Working with children, we also have a lot of material that comes up again and again. Central stories, parables, celebrations, or theological concepts that encounter children many times over the course of their childhood years. I have been able to discern, in the children, two very different attitudes when we come around to the same thing a second time. Sometimes I hear, “I already know this one.” What is implied when I say this? I may be saying that I am not interested in this material because I’ve already learned it, so I would prefer to either hear something different or, more likely, take a break. Or else I am hoping to impress you by demonstrating my superior knowledge.

But often I encounter a different attitude, one of delight. One time I returned with a group of children to a parable that is first introduced at age 3. An older child, who had heard this parable countless times, was there alongside younger ones. Quietly and happily, he simply said, “This is one of my favorites.”

What a difference. This child had learned to interact with this parable in a different way. It was not a story to be memorized, nor was it knowledge to show off. We had worked hard to offer him something better. Hearing that parable was not simply a transferring of knowledge; it was an invitation to ponder, to wonder, to enjoy. Every repeated interaction with that same Scripture was conditioned by this initial invitation and became a chance for him to ponder, to wonder, and to enjoy this nugget of Jesus’ teaching more deeply. This posture of wonder, natural for young children, can either grow into a settled habit, or can be driven out in favor of the pragmatic and efficient.

This “education to wonder” is particularly at home in the context of liturgy in general, and preeminently in the Great Triduum. Without wonder, we are simply rehearsing facts that you may already know: On the night before he was betrayed, Jesus gathered his disciples together for a Last Supper, where he washed their feet and invited them to imitate his humble service, and then instituted the Lord’s Supper, departing to the Garden of Gethsemane for a time of prayer before his arrest. After a sham trial, he was crucified, bearing his death willingly and patiently, calling for God to have mercy on his tormentors. He died and was buried while it was still dark on the first day of the week, and his disciples discovered the empty tomb and heard the announcement that he was risen.

That little paragraph just saved you 7-8 hours in church.

But the Triduum isn’t just about information to be taken in; it is an opportunity to contemplate, through thought, word, deed, and all five senses, the great acts through which we have been saved. It is an experience in which we may rightly feel anything in the full spectrum of human emotion. It is a chance to respond personally to Jesus’ invitation. It is a work of grand theater in which there are no passive spectators.

So, as Christ the Redeemer prepares to celebrate its tenth Triduum, we join scores of delighted children around the world, and say, “Again! Again!”