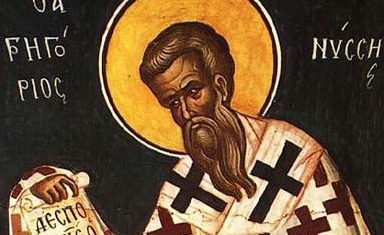 St. Gregory was born in the region of Cappadocia (modern-day Turkey) around 335 AD into a large, wealthy Christian family. (Among his siblings were St. Macrina–excellent reading if you’re interested in the role of women in the early church–and St. Basil the Great!) Despite his Christian pedigree, Gregory was slow to the draw when it came to his own faith. He dragged his feet in getting baptized until he had a terrifying dream of the Forty Martyrs of Sebaste beating him with rods for his indifference! Quite understandably, he had a change of heart and devoted his life to prayer.

When his older brother Basil became a bishop, he would force Gregory (quite against his will) to become bishop of the small town of Nyssa. Gregory’s gentle spirit was not suited to leadership, but time would reveal him to be a theological powerhouse. He would fan the flame of the faith with his own unique mind, and become one of the most potent defenders of the faith during the fourth century. Gregory, Basil, and Basil’s friend Gregory Nazianzen (who, together, became known as the “Cappadocian Fathers”) would work out what has become the time-tested, Church-approved “formula” for describing God: the Trinity, God is “one substance in three persons.”

Part of Gregory’s genius was that his God was so big. Far bigger, in fact, than any words we use to describe Him. But Gregory also maintained that God had revealed Himself as Trinity, and in that regard, He could (and must) be described. God is bigger than the words, but the words still matter! When Gregory saw the people’s minimizing of the Son and the Spirit, he knew it wasn’t just an issue of incorrect terminology or different perspectives; it was a failure in faith and worship. He understood the Christian life as an endless pursuit of closeness with God, of becoming more like Him. He also knew that one must have the right starting point for this to happen. Gregory showed that the only place to start is with faith in the Father, Son and Holy Spirit–three “persons,” together as one, even if it was hard to understand.

When we recite the Nicene Creed each Sunday, we confess the faith of Gregory. Not just the terminology, but also the faith and worship he preserved for us.

Gregory famously used ideas that were prominent in the culture around him to articulate and explain the Christian faith. Yet, he never did so indiscriminately. What cultural ideas in our own time might be helpful in explaining the content of the Gospel? What ideas are incompatible?